What I did was cut out various Alan Partridge shapes. The hair, jacket and tie use tracing paper, and the face and shirt are from thick (300g) paper. Over the hair shape I put some extra slices of paper, and on the glass that holds the whole thing down, I drew lines in the hair, the edge of the lapels, and over the tie.

The thick paper blocks almost all the light, but some gets through with the tracing paper, so you can build up tones in the image. On the best version, I then drew in Alan’s facial features with gel pen, biro and pencil.

Based on a screenshot from ‘This Time with Alan Partridge’.

I make pictures in a few different ways. Some of the illustration work is drawn digitally, but I also love working in ink, paint and pencils, especially if I’m doing people. Sometimes the pictures are a mix of things. 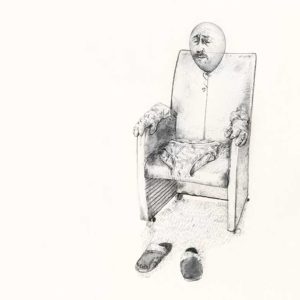